Totally confused by all the tools for managing dependencies? Pip, venv, Docker, conda, virtualenvwrapper, pipenv, … Which one should you use? Why do we even have all these different tools? Can they work together?

No wonder. The world of Python dependency management is a mess, but once you understand the tools and why they exist, it’s going to be easier to choose the one you want and deal with the others in environments where you can’t choose your favorite ones.

I’ll briefly describe each tool , why it’s created and the problems it’s tackling. At the end of the post, you can find a table summarizing all the information and the usual setups people use.

Pip (package installer for python) is the most basic package installer in the python land. It comes preinstalled with most python installations so it’s likely you never had to install it yourself.

Installing a package is as simple as running pip install torch. That command talks to PyPI (The Python Package Index), downloads the package, and makes it available to the current python installation.

It’s a very primitive tool. It knows nothing about different python versions or Jupyter kernels. 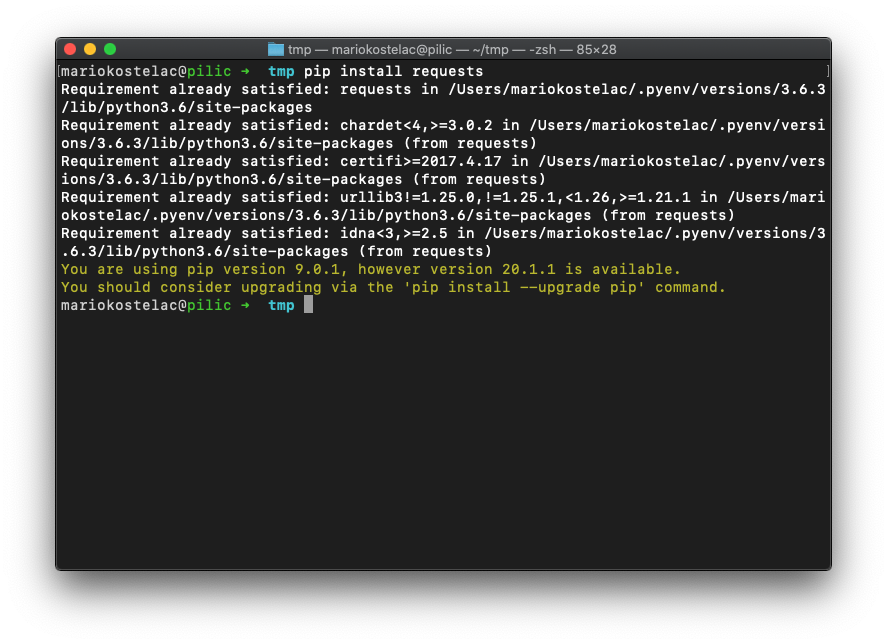 venv is a tool for creating lightweight virtual environments. 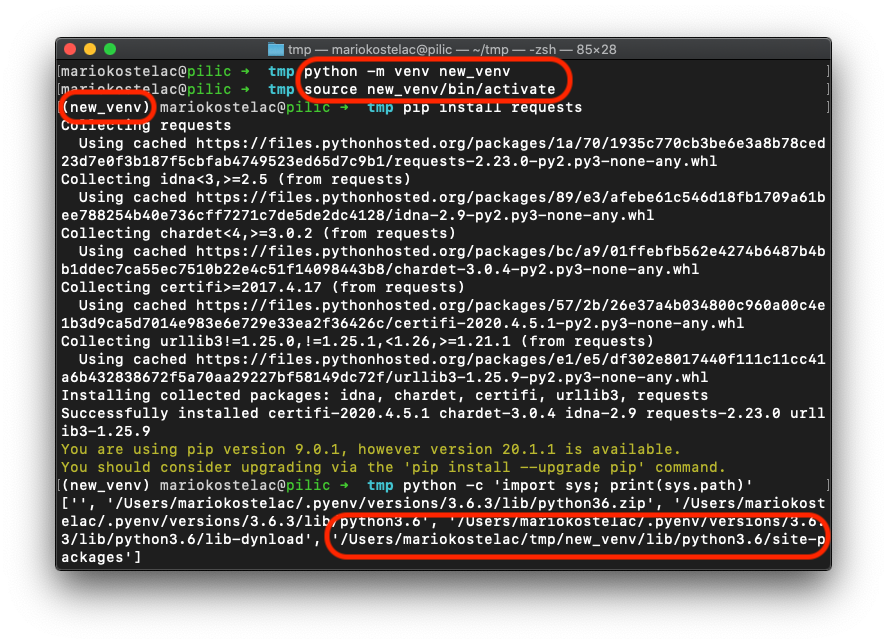 How do venv and pip interact?

They’re both the part of standard python tooling, tackle very different problems, and play together really well. You’re encouraged to use pip for installing packages within virtual environments.

They’re relatively simple, but tackle a very important problem - keeping your environment reproducible and consistent. People who care about it the most are production engineers.

Pip-compile takes setup.py/requirements.in file and compiles a requirements.txt with all dependencies locked to specific versions. Some tools (npm, yarn, bundle) call it a lockfile. It solves the first problem I’ve described.

Pip-sync takes a compiled requirements.txt and ensures that your current environment has exact versions and only packages defined in the requirements.txt. It solves the second problem I’ve described.

How does pip-tools interact with pip and other tools?

pip-tools is a composable tool that solves one specific problem - environment reproducibility. It is designed to be installed inside a virtual environment (created by venv) and wraps pip to install defined packages.

Python became a wildly popular language and all major operating systems started building on top of it and bundling it out of the box. That’s why you can just type python in your terminal on a freshly installed Linux or Mac OS without installing it yourself.

Pyenv was created to solve the problem of installing and switching between different versions of python on the same machine.

It’s a handy tool on developer machines because it keeps the system version of python (needed for the OS to run properly), but can install and switch between different versions for different applications (based on current path, user etc.).

Here’s an example of switching between system version and 3.6.3. Running pyenv local 3.6.3 will remember to activate version 3.6.3 next time you navigate to that directory. 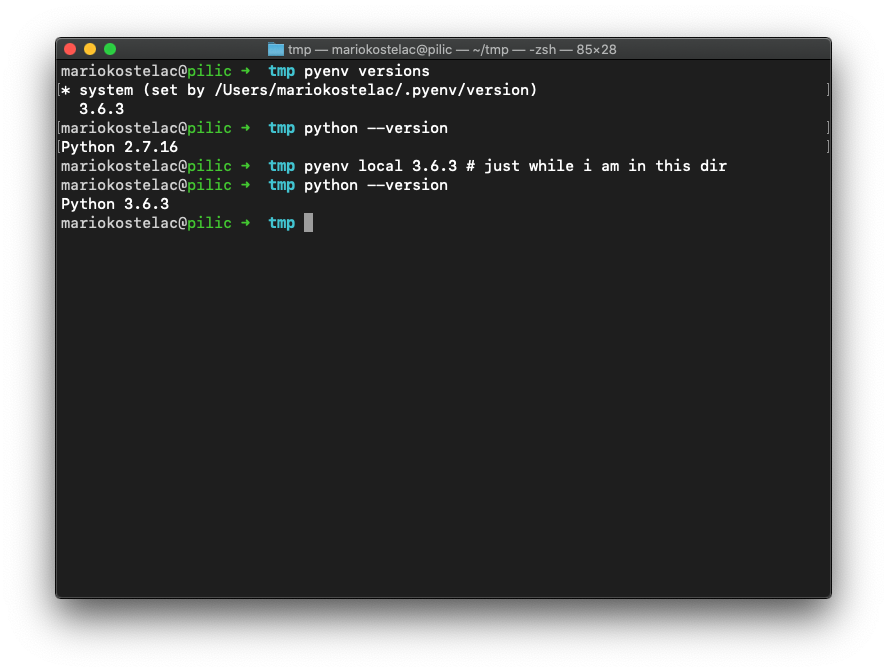 How do pyenv and pip interact?

Pyenv and pip complement each other. You can consider pyenv being a container/shell for pip. Pip installs packages for the current python version, whatever pyenv sets it to. In fact, pip commands from two environments are different binaries and do not know each other. 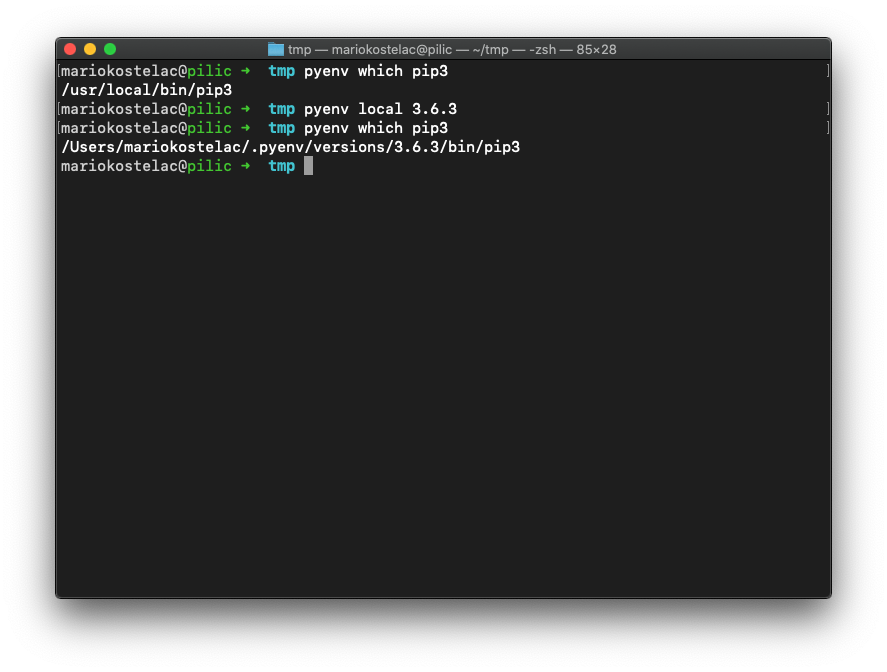 You may know this tool under different names - Anaconda or miniconda.

Once the scientific community started using python seriously, requirements for package management tools in python land increased. More specifically, python became too slow for some pure computational workloads so numpy and scipy were born. These libraries are not really written in python. They are written in C and just wrapped as a python library.

Compiling such libraries brings a set of challenges1 since they (more or less) have to be compiled on your machine for maximum performance and proper linking with libraries like glibc.

Conda was introduced as an all-in-one solution to manage python environments for the scientific community.

It took a different approach. Instead of using a fragile process of compiling libraries on your machine, libraries are precompiled and just downloaded when you request them. Unfortunately, the solution comes with a caveat - conda does not use PyPI, the most popular index of python packages.

Conda has its own package index with multiple channels (anaconda channel is maintained by the creators of conda and the most reliable one). Anaconda channel isn’t as complete as PyPI and packages that do exist in both places are often few versions behind the PyPI. Other channels update packages faster, but I strongly suggest checking who maintains respective packages (often not library authors!). 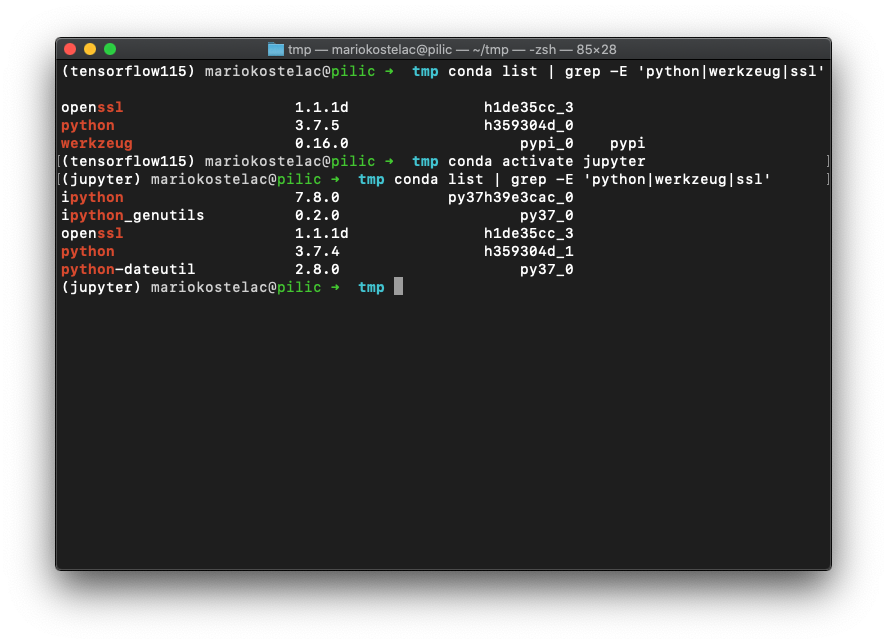 Altogether, Conda is tackling these problems:

What are anaconda and miniconda?

Anaconda and miniconda are different distributions for conda tools. Miniconda aims to be as minimal as possible - it installs just python and the conda tool. Anaconda installs additional 160+ packages often used in data science workflows.

How does conda interact with pip and other tools?

Conda is a very powerful tool. It tackles many problems so it often clashes with other tools in some axes. It is possible to make conda work with other tools (with pipenv for example), but it requires deeper understanding of both tools, the python package loading, and is not something used very often.

Pipenv is a dev workflow tool, created by the author of popular requests package. Apart from making the common workflows slick and managing the file with requirements (Pipfile), pipenv tackles following problems:

It loads packages from PyPI so it does not suffer from the same problem as Conda does. 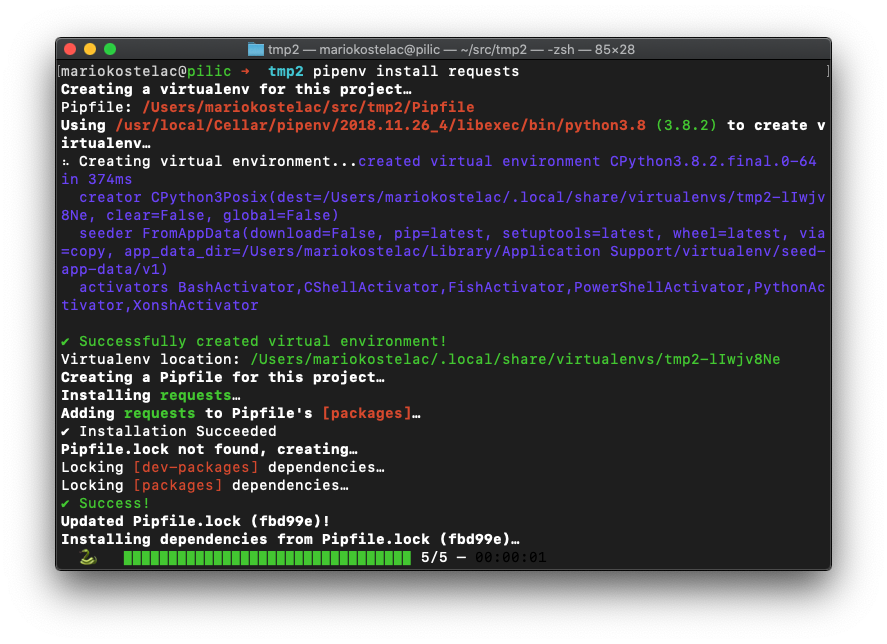 How does pipenv work with pip and other tools?

Pipenv is a wrapper around pip and several other tools and is meant to bring all the jobs under one umbrella. Installing packages with pip within an pipenv environment will work, but it will not automatically put it in the Pipfile and Pipfile.lock.

Poetry - “python packaging and dependency management made easy”. Poetry is most similar to pipenv and they often compete for users. Main problems poetry is tackling are:

You can see that it’s not that different from Pipenv. It’s recommended to use it with pyenv. Once you do that, it tackles all the problems pipenv does, but also helps with creating python packages and publishing them to PyPI. 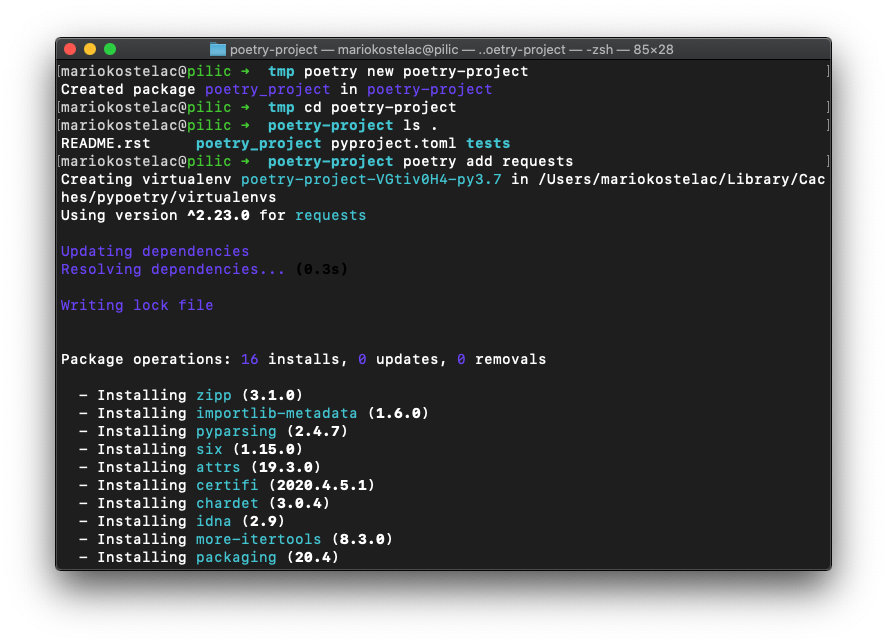 How does poetry interact with other tools?

Poetry complements pyenv and together they form a complete solution for managing your workflows. Same as with pipenv, it uses PyPI for installing packages so there is no need to use pip once you start using poetry.

If you wonder why there are two very similar tools, you’re not alone. The main technical difference is the way they resolve packages. It’s actually a very difficult problem and Poetry is superior in that dimension. When you’re installing a new package, it will figure out faster what exactly it has to do and generally, it will handle complex dependency graphs more gracefully.

My general advice is that you’ll be fine with either, just pick one if someone hasn’t done that already for the project you’re working on.

Docker has nothing to do with python dependency management, but people often talk about it in the same context so it’s definitely worth exploring what it does.

Docker is a tool to create, run, and manage containers. You can think of containers as very lightweight virtual machines. There is no virtualization, but they are very isolated from the rest of your operating systems. It was created as a general solution to package production software and run it in a reproducible, isolated way in the cloud.

You can run any of the tools I’ve explained in the Docker container. The nice thing about Docker is that the isolation it gives you dodges several problems. For example, the usual setup is that you run each app in a different container. That means you can install different python versions in there and they won’t know each other. Also, there’s no need for any virtual environment management since apps are isolated by design.

Docker is a great innovation that happened to the way we run software in production, but I don’t recommend it as the solution for python dependency management problems on dev machines.

There are several problems people struggle with when using Docker for dev environments: 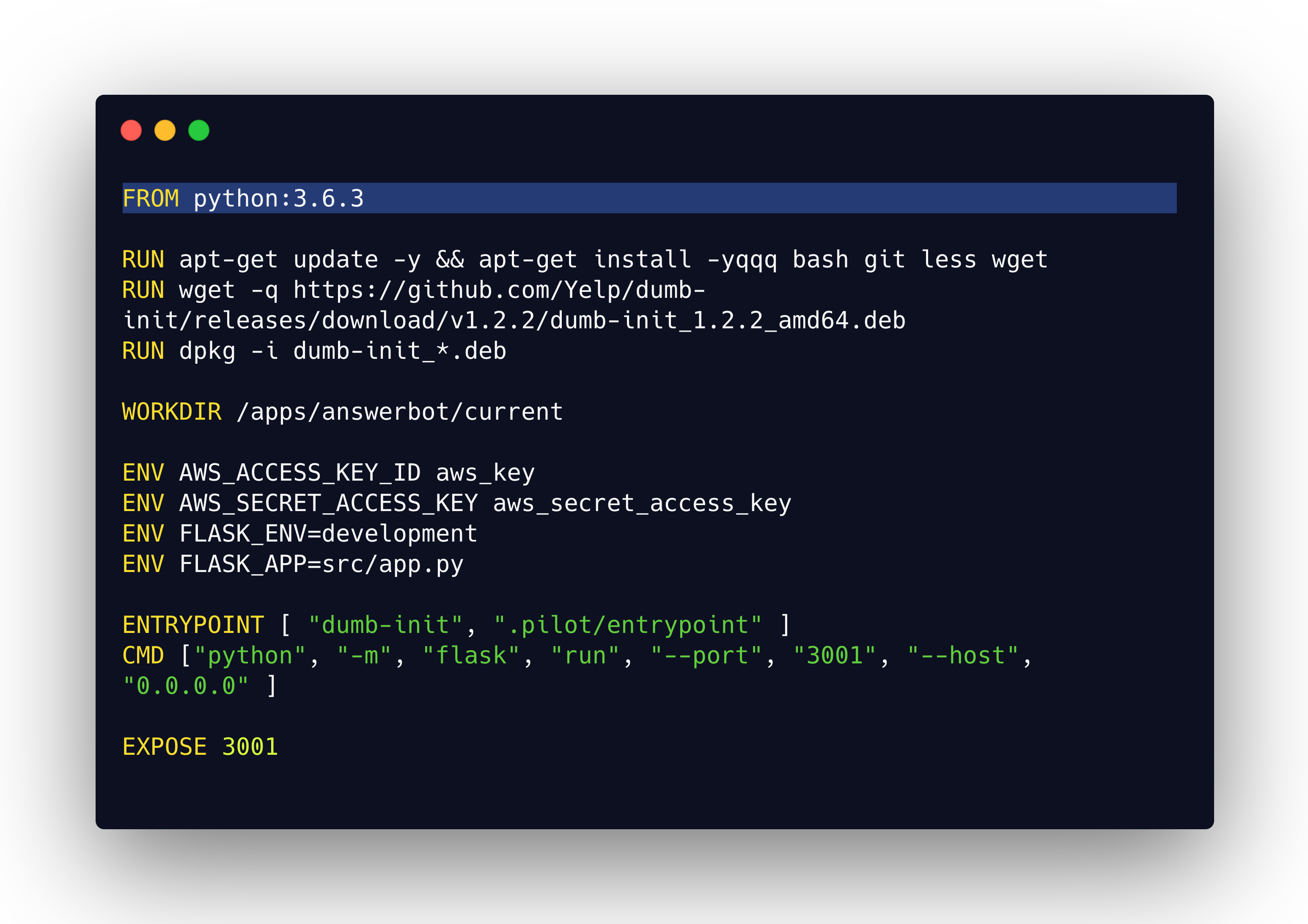 * Conda note: Even though conda handles installing non-python packages, it can’t replace your system package manager (yum, apt-get) completely. Running your software on platforms like EC2 will still require installing some packages outside of conda.

* Docker note: since Docker is very much agnostic of Python, you need some other tool inside your container to do these jobs.

Composable set of tools, each tool solving one problem. I highly recommend this setup for two main reasons

Same as pipenv, it brings a lot to the table with no major drawbacks.

Some people use the conda alone. The main problem with this setup is that some libraries are not available in conda channels so you have to resort to using conda + pip.

This is often used because conda integrates very well with Jupyter through nb_conda_kernels extension. I use just when I have to use conda in the environment somebody else has set up (like SageMaker).